After the much heralded firing of a 3M22 Tsirkon hypersonic cruise missile by the Project 22350 class frigate SKR-454 “Admiral Gorshkov” in the White Sea on 7 October 2020, it appears the missile integration programme may have stalled.  The first launch, timed to coincide with President Putin’s 68th birthday, was widely reported by the media and three further tests firings from SKR-454 were planned for the remainder of the year.

When Russian maritime authorities issued a closure area (PRIP) for the White Sea between the 20-24 October 2020 it looked certain a second firing was about to take place.  However, the new closure, ARKH PRIP 51/20, (effectively a re-issue of ARKH PRIP 48/20 which was successfully used by SKR-454 on 7 October) appears not to be used.  Although some light vessel activity was noted in the White Sea during the forenoon of 20 October it was probably routine and not firing related; similarly, the dearth of media reporting likely indicates that no firing actually took place in ARKH PRIP 51/20.

Admiral Gorshkov, which highly likely returned to Severodvinsk on 7 October, appears to have remained in the port throughout the duration of ARKH PRIP 51/20 and was imaged in the same berthing position during the 24 October.

The reason for this apparent break is not known and there are several likely causes.  Obviously, problems brought about by the current pandemic cannot be ruled out however, it is thought more likely to be a platform or missile system problem has caused the delay.

As of 28 October 2020, no further White Sea PRIPs had been issued.  Therefore it is unlikely further White Sea based 3M22 Tsirkon hypersonic missile firing activity from Admiral Gorshkov can be expected in the short term.

at October 28, 2020
Email ThisBlogThis!Share to TwitterShare to FacebookShare to Pinterest

After the much heralded firing of a 3M22 Tsirkon hypersonic cruise missile by the Project 22350 class frigate SKR-454 “Admiral Gorshkov” in ... 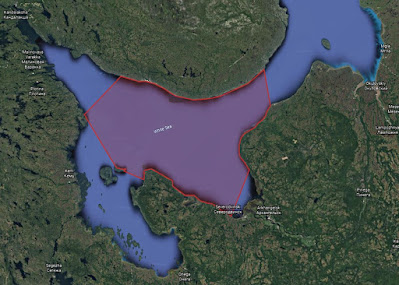