This latest underway period, which is expected to last around 10 days, is likely an INDEX certification cruise which may include onboard system calibration and/or defect rectification coupled with crew proficiency training.  Whilst it could be a further sonar calibration run this is thought to be less likely due to the anticipated duration.

B-585 "Khronstadt" was last noted active conducting sonar calibration trails in the Gulf of Finland, 4-8 May 2022 and is expected to join the Russian Navy Baltic Fleet mid to late 2022.

at May 14, 2022
Email ThisBlogThis!Share to TwitterShare to FacebookShare to Pinterest 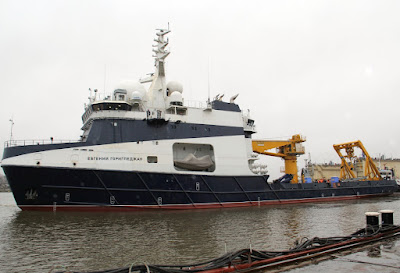