The Russian Academy of Sciences, PP Shirshov Institute of Oceanology owned & operated scientific research vessel "Akademik Boris Petrov" has indicated it intends to pass close to the UK on its way to an announced scientific cruise in the South Atlantic.

The provocative change of route is almost certainly strategic messaging to the United Kingdom & is highly likely intended to raise tensions in the Northern Isles after essential underwater cable infrastructure was inexplicably severed between the Faroe & Shetland island chains earlier in the week causing a major incident alert which Scottish First Minister Nicola Sturgeon described as an "emergency situation" for the islands.

Akademik Boris Petrov departed homeport Kaliningrad on 17 October 2022 for a programmed scientific expedition to the South Atlantic Ocean off Brazil. The original navigation track (NAVTRK) passed through the English Channel into the Atlantic however, since departing the Skagerrak the vessel has slowly transited past critical underwater infrastructure in the North Sea raising concerns over what her tasking actually is.  The Petrov is a state-of-the-art underwater surveillance & intelligence gathering ship and a "Vessel-of-Interest (VOI) for Western Navies; her presence around the UK will be monitored closely.

Analysis of the Petrov's latest NAVTRK on 21 October indicates the vessel intends to pass through the Orkney Gap, in to the Minches & through sensitive waters off the Faslane Naval base, home to Britain's nuclear-submarine based deterrent.

The tentacles of Russia's illegal war in Ukraine are seemingly moving west & whilst this NAVTRK change is almost certainly just strategic messaging, it remains a stark reminder that when it comes to controlling the critical underwater infrastructure upon which Western economies depend, it is Russia that holds all the cards.

For updates on this story & other Russian Navy vessel activity catch me on Twitter: @MatchlessMan410

Akademik Boris Petrov transited the Shetland - Orkney Gap during the afternoon 21 October 2022 & was located 18NM north of Noup Head lighthouse during the 1800Z hour continuing westwards towards a Minches transit likely during the forenoon, 22 October.

Dutch warship HNLMS Tromp maneuvered to a position 32NM NE of the Isle of Lewis likely to intercept & escort Akademik Boris Petrov should it continue on its stated NAVTRK through the Minches towards UK sensitive waters.

Akademik Boris Petrov changed NAVTRK overnight 21/22 October and did not transit the Minches as previously indicated.  Instead, the vessel transited to the north west of the Isle of Lewis some 50NM off the coast at all times.  It is not known if the Dutch Navy vessel HNLMS Tromp (or other NATO warship) conducted surveillance against Akademik Boris Petrov during her transit.  Boris Petrov will now pass well outside UK sensitive waters & well to the west of cables surveilled by Yantar in 2021.

There is absolutely no suggestion that Akademik Boris Petrov was involved in the Faroe-Shetland cable incident this week but given the huge interest & sensitivity regarding underwater infrastructure, it is highly likely this transit was strategic messaging to the UK at a time of heightened interest in undersea infrastructure.  Her distraction job done, Akademik Boris Petrov continues on her scientific mission to the South Atlantic.

at October 21, 2022
Email ThisBlogThis!Share to TwitterShare to FacebookShare to Pinterest 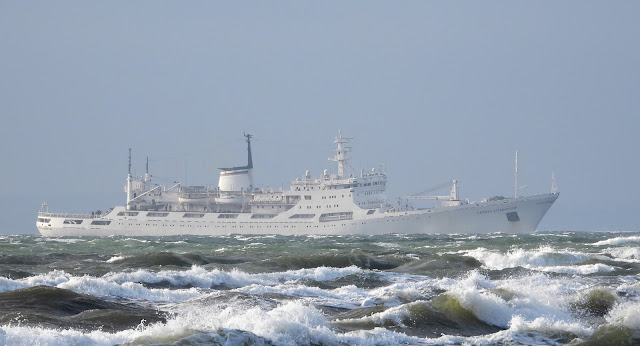